In an increasingly dangerous world, governments today are facing an unprecedented challenge: how to keep their citizens and institutions safe while still allowing for the free flow of information. To meet this challenge, governments must find effective ways to protect sensitive communications without getting in the way of critical government operations and missions. 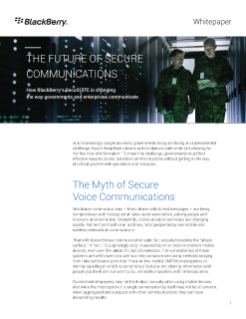 BlackBerry uses cookies to help make our website better. Some of the cookies are necessary for proper functioning of the site, while others are to help us understand how you use it. Read more here about our cookies, and how you can opt out. By continuing to use this site you accept our use of cookies.